About a month ago, I moved in with my third and final host family.

First, there’s Euler, my father. He is an “engineer” who spends most of his time traveling for work, much like my father in the United States. Well, truth be told, he’s not exactly an “engineer” but that’s the title that they gave me. He works on buildings for businesses like grocery stores. He showed me his most recent project the other day: a grocery store and its parking lot in another city. That project already ended, but he’s already onto the next. When he’s not working, he enjoys a good glass of wine and watching soccer games of one of the local teams, Galo.

Next, there’s my mother, Cristina. She is one of the most hilarious, most kind people I’ve ever met. In the past, she worked for an international business that partially dealt with exchange. A few years ago, she realized she wanted to become a lawyer, so she is now a full time student in her fifth semester of law. In addition to studying, she takes my brothers to and from school, soccer practices, tennis practices, and any other activities they participate in. When she gets time, she likes to go to the family’s sitio and ride her horses. She also is the “mother” of two of the other girls who live in our building. She frequently takes us down the street to get acai or eat espentinhos (meat on sticks). Sometimes, if we’re lucky, she does our make up. She is an incredible cook and I eagerly await the dishes she makes for dinner each night. She is a wonderful person, and I’m so happy I get to spend the last couple months of my exchange with her as my mother.

Me and my third mae!

Rafael is one of the best kids I have ever met. He has great manners and is very kind. He offers me acai every time he orders it and has even made me a hamburger! He goes to school in the mornings and goes immediately to soccer practice, so he doesn’t get home until pretty late most nights, about 9 or 10. I don’t see him too much, but every time I do, he greets me with a smile. We’ve mostly bonded over music because we like the same bands and singers.

Gustavo, or “Gu,” was my roommate the first few days I moved into the house. There was some confusion about whether it would be me, an American, who would go into their house or whether it would be a girl from Thailand. Gu was confused at first, and spend the first couple of days asking me about Thai cuisine and telling me I was “lying” every time I tried to explain I’m actually an American, that his mom had told him a girl from Thailand would move in BUT the plan changed. He has now accepted my origins and remains one of the cutest children I’ve ever met. He loves soccer and plays every day. He also takes guitar lessons on Mondays and goes to tennis lessons twice a week. He’s started collecting trading cards for the World Cup and spends his time after lunch organizing them. 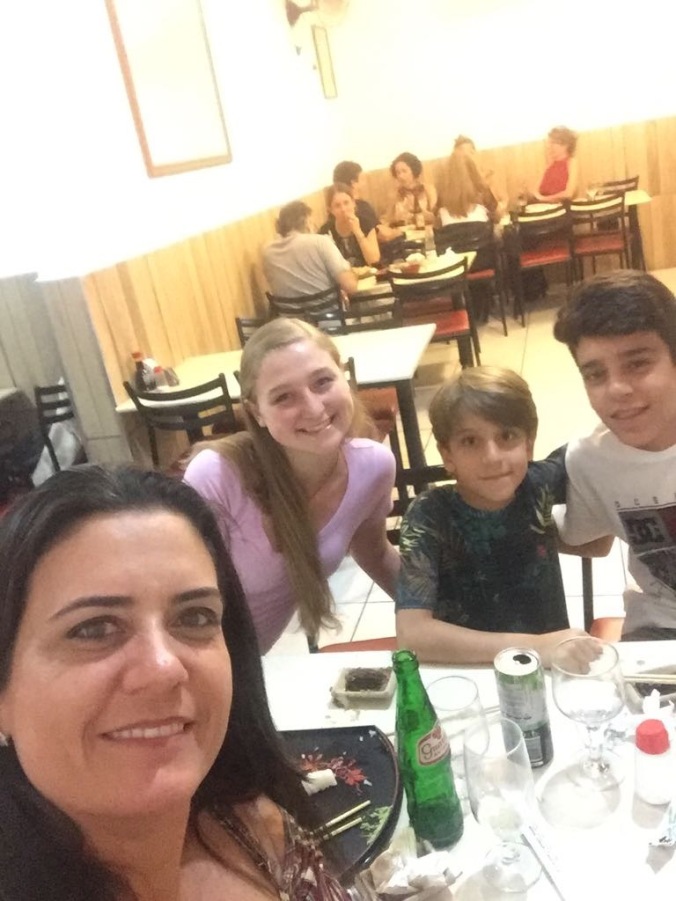 With my mae and my brothers, Rafael (right) and Gu (middle).

Honestly, having two younger brothers is really fun. I have a younger brother in the US, but he’s only about a year younger than me, so there’s not much difference between how we act. These brothers are younger, so to see how they behave, what they like to do, how their life is, it’s fun.

I can’t even tell you what they were doing. The younger one willingly put his head there.

In addition to my “family,” we have a maid who feels like a big part of this house. Her name is Eliana, and she works almost the entire day Monday-Friday cleaning the house, doing laundry, and cooking. Her food is so good. I can’t wait to eat lunch every day because of it. She’s also hilarious and I adore talking to her about anything, from friends to politics to her life. She has taught me how to make popcorn on the stove since it’s my favorite snack and we don’t have a microwave.

I think my favorite thing about my third family is there is no English, just Portuguese, which is really satisfying. My Portuguese has finally reached a point where I understand almost everything without the need for repetition and I can usually respond without problems, which is exciting!

I love this family and I look forward to the remaining two months with them. (Two months, can you believe that?)

One thought on “My Third Host Family”