I remember sitting in my AP Spanish class last year learning about Carnaval. I remember Señora Bencini turning to me as we watched Carnaval videos from all over South America and saying, “Next year, that’ll be you!” At that point, I didn’t even know my city in Brazil yet. Carnaval seemed so foreign and unreal, so culturally different, so FUN, but it didn’t quite seem like I’d ACTUALLY be there, so it faded to the back of my mind. Until I arrived in Brazil.

My Spanish III Honors class my junior year. (We don’t have a picture of AP Spanish and this was the best class ever.) ((I also don’t regret my shoe choice at all))

For those of you who don’t know, Carnaval is a period of celebration and indulgence before religious folks enter the period of lent, where they give up something for 40 days. It usually involves a parade, costumes, GLITTER, music, friends, and when you’re not a Rotary exchange student, drinking. In Carnaval, people take their costumes pretty seriously. There were more people dressed up for Carnaval than there were on Halloween.

I was told on numerous occasions all of the fun and joy Carnaval is. But to be honest, I didn’t really believe it. I’m not the kind of person who enjoys TONS of people, so the idea of being in a street with thousands and thousands of people and loud music didn’t really appeal to me. Talk of the overwhelming smell of pee didn’t help much. In fact, the first full day of Carnaval, I went home early because I wasn’t REALLY enjoying it.

The dream team. I had so much fun dancing (and searching for shade, bathrooms, FOOD…) with you all!!)

The second full day I understood what all of the fuss is about.

Exchange students from other cities and districts traveled to Belo Horizonte to spend Carnaval. In total, there were a lot of us. Too many to count. We took to the streets with a few Rotary officials and the thousands of other Brazilians looking to spend Carnaval the right way.

This isn’t all of the exchange students, but this is some of us with the kind Rotary volunteers who kept us safe, fed, and hydrated!! Here we have people from Poland, France, Mexico, US, Italy, Denmark, Netherlands, Canada, Sweden… all over!

Basically, how Carnaval works: schools are closed and so are some businesses. Each day, there’s tons of “blocos” with parades and music buses or even just DJs. Online each of the blocos are listed with the type of bloco/theme, the time, and the location. Some of them have really funny names like “fui pobre mas nem lembro” (I was poor but I don’t even remember) and “funk you” (funk is a popular type of music here. I’m sure you get the insinuation). Others are more simple or straightforward, like “Então, Brilha” (then, shine) and “Garotas Solteiras” (single ladies). While there are a million options, I don’t think you could make a wrong choice. As long as you’re with the right people, everywhere you go is fun.

Carnaval this year was from February 9 to February 13/14, so I had plenty of time to experience different things. I went to more traditional blocks, with actual parades, drums, and singers. I went to electronic blocks (where my friends and I danced like never before). I went to funk blocks and samba blocks and classic Brazilian music blocks. Each day we woke up around 9/10 (which is actually late for Carnaval. Some of the blocks started at 5 or 6 am). We’d get ready, eat something, and then head out to the streets until 8 or 9 (again, this is really early. Most people stay out until AT LEAST 1 or 2 am, but it gets dangerous and I got tired after walking around all day in the hot Brazilian sun).

My favorite part of Carnaval was (of course) talking to Brazilians!! Brazilians are very friendly, very open people, so when a bunch of gringas walk through the crowd, usually a few people approach us and talk to us. They were really funny and really nice. We actually exchanged contact information with a few of them and we’re planning to hang out in the next couple of weeks. 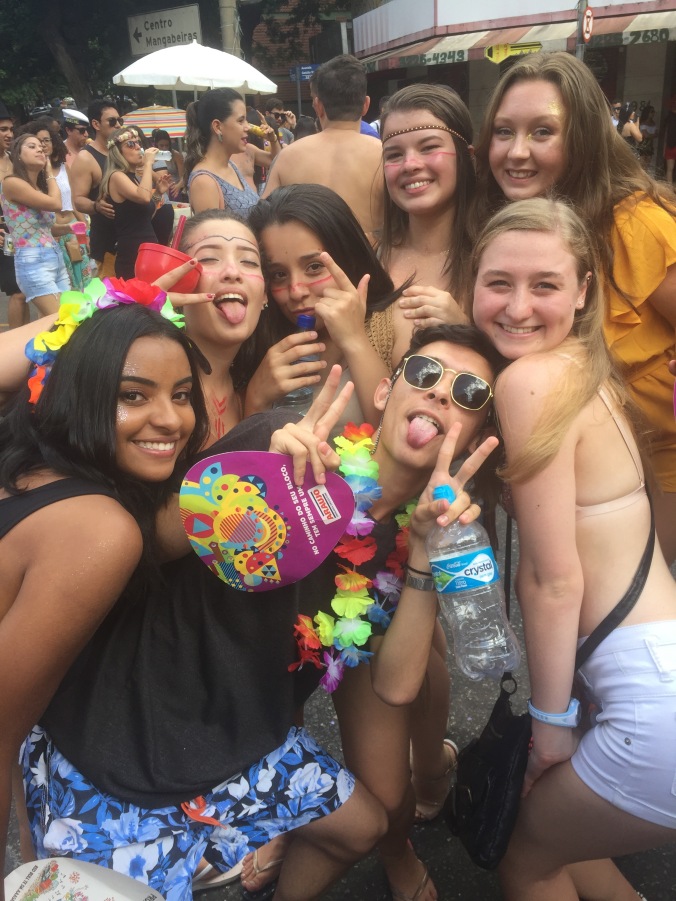 Some of the Brazilians we talked to. We were with them for about an hour talking about our countries, Brazil, music, and Carnaval!

While I had the best time of my life, I also saw a different side of Brazilian culture that made me really sad. First of all, there’s a really high level of disrespect for the city itself. It’s been a few days since Carnaval ended, and the streets were covered with trash: food containers and beer cans and water bottles flooded the streets. The streets also smelled like pee. Very strong pee. I watched shop owners have to scrub the sidewalk outside of their shop to try to wash the stench away. I also saw blunt theft: one of the exchange students got his phone stolen, which is not at all uncommon during Carnaval. I saw people stealing drinks from venders and running away. I saw fights break out over petty stuff, like bumping into one another, which is inevitable in a street with so many people. I also (for the first time) felt really uncomfortable walking home alone. Most of what I saw is a part of life wherever you go, but it was (mostly) the first time I’ve seen this side of Brazil.

Despite this, Carnaval overall was one of the best weeks of my exchange. I’ve very grateful to be living in such a huge city with such abundant activities! Carnaval, I hope I see you again, but until then, estarei com saudades (I will miss you).

The end of Carnaval marks the official end of summer and beginning of the school year. I still don’t know where I’ll be going to school this semester but I should find out within the next week.