Remember how I went to Brasília back in September and I thought I wouldn’t be back for years? Funny how things work out, because I got to return!

Well, I actually just got to pass through, but driving down the main stretch and just seeing the ministries again brought me so much satisfaction.

This time, the real destination was Rio Quente Resorts: where Corina (my host aunt) and Claudio (her husband) have some sort of membership which allows them to return each year. This time, they generously invited my family to join them for a week.

Rio Quente is one of the most incredible places I’ve been. It’s essentially hot springs morphed into an amusement park that’s designed for the whole family. They have naturally heated pools. They have lazy rivers. They have waterslides and rides. They have diving and kayaking and just about everything you could ever think of. OH, and the food. Don’t even get me started.

As a Floridian this might come as a shock, but it is, in fact, better than Disney in just about every way. 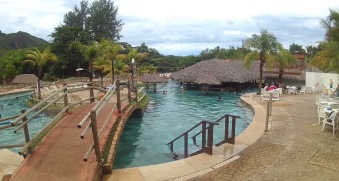 Theo in the lazy river

Claudio with the food!

Honestly, we spent most of the time relaxing in the water or eating. Everything about it was wonderful, but my favorite moment happened outside of the park.

One night, my host brother and I went walking down the main stretch in search of some souvenirs. We stopped outside of one store and we were sitting on a bench speaking in English. One of the restaurant owners, Gio, overheard us and immediately approached us, saying (in Portuguese) how much he’s always wanted to learn English. One thing led to another and the next thing I know we’re in Gio’s restaurant meeting his wife, two daughters, and his son.

My host brother and I were given free cokes and we took a seat. We sat in Gio’s restaurant until (no exaggeration) 1 AM. We made a circle and just started talking. The conversation started light, talking about where I’m from and how I, a gringa, ended up in Rio Quente with a Brazilian family. As time went on, the conversation gained more and more weight. We talked about everything, from feminism and abortion to drugs and arms to current events in Brazil and the US. Gio invited us to return the next day and eat for free.

The front of Gio’s restuarant (Taken from TripAdvisor)

We met Gio on the second day of our trip and we saw him every day after. We would either eat there or pick up food or just stop by when we were passing to chat for a bit. Every time I saw him, he was smiling. He was happy. He was so content with his life and where he was at each moment. This brought me so much joy. Despite this “friendship” we developed, I never got to properly say goodbye.

Whenever someone finds out I’m an exchange student, they always ask the same thing: why Brazil? Why not Germany or Spain or literally any other country?

THIS is why Brazil. Not just Brazil, but really South America in general: the people. Maybe I’m terribly mistaken, but I feel like there are very few places in the US or Europe a foreigner would be treated the way I am every day, with such kindness and warmth. Even by strangers. Even with my flawed Portuguese. Everywhere I go people are so helpful, so interested, so welcoming, so wonderful. Brazilian people are truly the best part of this country. Claudio says that’s a political answer. I say it’s just the truth. 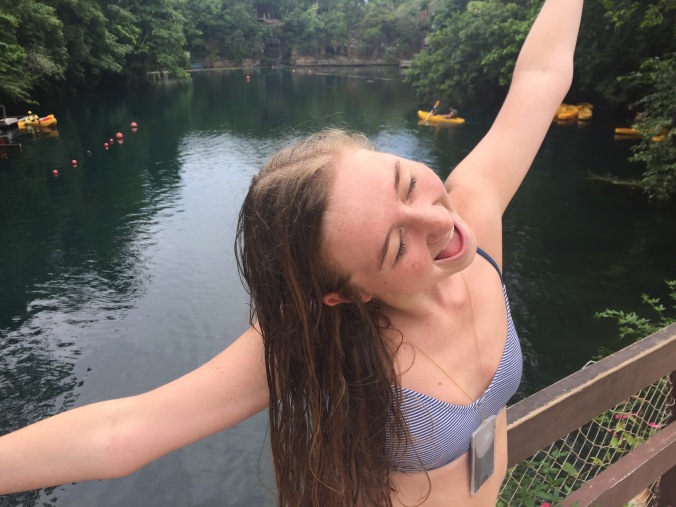 The first day at the park. I was excited, to say the least.

Rio Quente was great, but this experience with Gio and his family was far greater. It was probably so small to them, but I can tell you that it was one of the highlights of my exchange. Sitting in that restaurant at 1 AM and discussing complicated topics with people who view the world completely different than me… well, that’s why I did exchange. I was seeking a wider world view, a new perspective, something like that. Day by day, person by person, I’m getting there.