When I was either a freshman or a sophomore, my art teacher (one of the best people I’ve ever met) said the following: “I like my classes with the seniors more. By that time, they’ve developed a personality.” I always thought this was funny because I spent most of my time with her. (Seriously. About 4-5 hours a day minimum).

My art teacher and I at graduation, when I had, in fact, developed a personality.

I kind of understood it, but not to the extent I do now. Freshman, sophomore, and even junior Hannah lacked the confidence and self love to jump halfway across the world and construct an entirely new life, new self. I’m still amazed there are 14 and 15 year olds who have the courage to do such a thing.

This weekend was inbound orientation. It was, no exaggeration, one of the best weekends of my life. So many different events across the course of the weekend highlight the level of confidence I’ve achieved, which was nonexistent my early years in high school.

The weekend started with a talent show. If you know me, you’d know this is the kind of thing I hate, the kind of thing where I hide in the back and hope no one notices I exist. Well, a Rotary intern and my first Brazilian friend had mentioned performing together since I first arrived. I thought he was joking. He was not. So next thing I know, after the Mexicans had performed some sick dance and people had made funny jokes, Lucas and I are standing in front of all the inbounds “singing” (lip syncing) “The Start of Something New” from High School Musical. It was awesome. 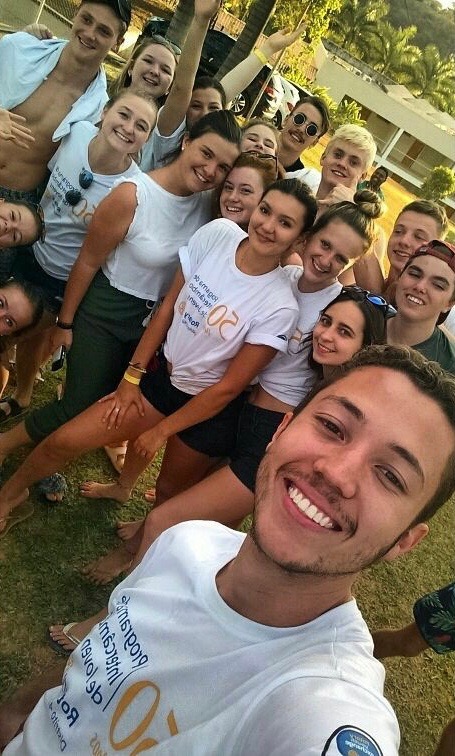 Lucas (taking the selfie) and our team for the games.

I’d say the weekend as a whole was a lot like that moment. You’re just kind of thrown into things and you either do really well or you’re terrible and fail, but in the end it’s always okay. The second day we had a competition between three groups of exchange students in various obstacles. I am not athletic, I’ve never been athletic, so I kind of stood to the side of things. But there was one event where they needed the smaller people to carry through a small rope structure without hitting the sides. This was my moment to shine. All I had to do was stay very still, put my hair up, and tuck my t-shirt into my spandex so my teammates could carry me through the rope. This is the event I’ve been waiting for my entire life. 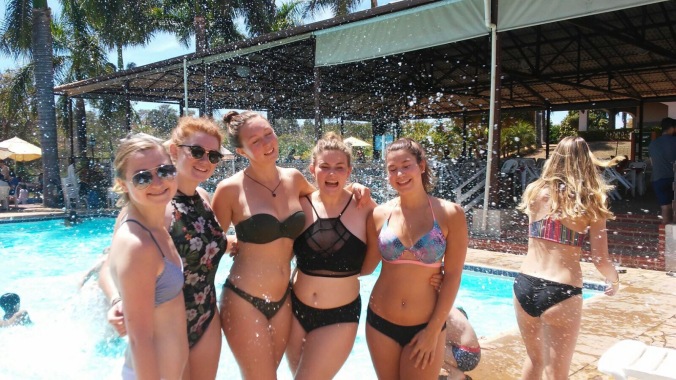 We were trying to take a nice picture when the boys starting splashing water on us.

It’s funny, because I used to be a very private person. I was ashamed of the things I’d done in the past. I thought my actions made me a bad person, an outcast, someone not worthy of love or friendship. I’ve stopped caring about what people know and what people think because the past is the past. It’s what made me who I am and it’s showed me who I do and do not want to be. For this reason, I’ve been able to make friends who know ridiculous pieces of information about me. Friends that can tease me and that I can tease. It’s so much more fun this way.

Skylar, for instance.  I swear we are the same person. The same thoughts, the same likes, the same experiences. Well, to some degree. We think similarly. It’s incredible that I only met her in person three days ago, because it feels like a million. The coolest part? We’re probably going to the same university when we return to the US. And if we don’t, we’ll at least be in the same city. And I think that’s pretty cool. Here, we’re 6 hours away from each other, but we’re hoping to meet over our summer vacation and we’ll definitely see each other at the other district events.

I have to say that in general my favorite part of exchange is the people. I’ve talked a lot about the love I have for Brazilians (or so I think I have) but this weekend I was exposed to so many people from so many different nationalities. I got to talk music with a Mexican boy, talk politics with Americans, talk the Holocaust and WWII with a Polish girl. I got to talk to so many unique people with lives entirely different from my own. That is the exact reason I wanted to go on exchange.

I’m glad I’ve developed a personality I’m proud of, one that I’m confident of, so much that I can already let loose with you guys. It’s been such a blast to get to know you, whether it’s been the last three days or the last three months. (Yes, three months. Some of us were talking before we came!) 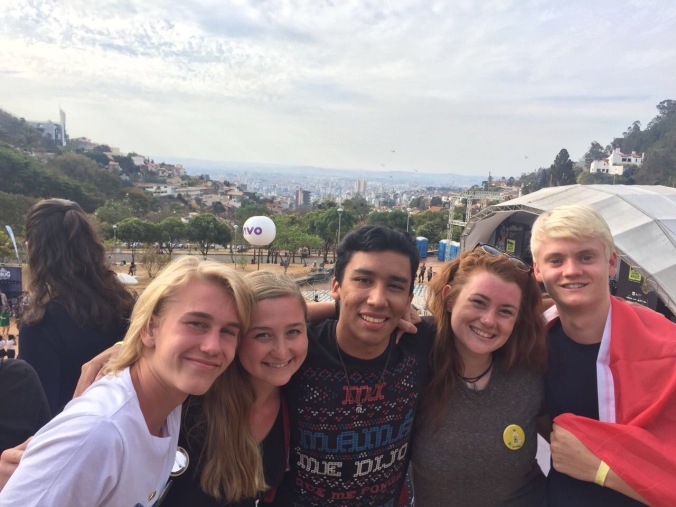 This weekend was probably one of my favorite yet. Between dancing in the pool and every single exchange student leaving with a sunburn, there was this sense of community and comradeship that filled the air around us. We’re now connected, every single one of us, in a way that can only be understood entirely by exchange students. We’re a different kind of community, a dysfunctional family. I adore you guys.

All of the inbound exchange students in my district (4760).

One thought on “Inbound Orientation”