The first new content I truly understood in school pertained to Brasília, the capital of Brazil. Basically, in the 1960s Juscelino Kubitschek de Oliveira (I can never remember his full name but it’s okay because everyone refers to him as JK) moved the capital from Rio de Janeiro to Brasília to better unify Brazil and make the capital less vulnerable to outside attacks.

Aside from this historical tidbit, I’ve always thought Brasília seemed cool, but it seemed unlikely I’d make my way there during my year in Brazil. It’s about 10-12 hours from my city and much less popular than Rio and São Paulo, so I’d just accepted this reality and focused on how much I love Belo Horizonte and all it has to offer.

Last week, mãe’s family was in town visiting. There, I got to meet her older sister, Corina, and her husband, Claudio. They turned out to be from Brasília. Shortly after we started talking, they invited me to their house in Brasília. At first, I thought they were playfully inviting me. You know, when you invite someone to come stay with you but it’s a far-fetched idea. Well, I guess this wasn’t so far-fetched. Somehow, things all fell into place and I received permission to go to Brasília for a few days!

One of our stops on the drive to Brasília, where I tried pamonha for the first time. Pamonha is a corn dish that google describes as “a paste made from sweet corn, boiled and wrapped in corn husks.” This entire store had a million corn dishes. Muito legal (super cool).

The distance to Brasília from my city is about the same distance from my city in North Carolina to my city in Florida, so I expected the drive to be very similar. To my surprise, it was very, very different. Here there’s a “highway” connecting the cities that I believe was constructed only with the move of the capital from Rio. The “highway” is primarily one lane each way and only passes through a few towns the entire journey. There’s no exits every few miles with McDonald’s or gas stations.

My first day I got to go to Praça dos Três Poderes, or “plaza of three powers.” It receives this name because it’s located right next to the President’s office (executive power), the Supreme Court (judicial power), and the National Congress (legislative power). I found it odd that here in Brazil people can’t visit the President or Vice President’s residences. In the US, the White House is right in the middle of everything and tons of people visit it every year. 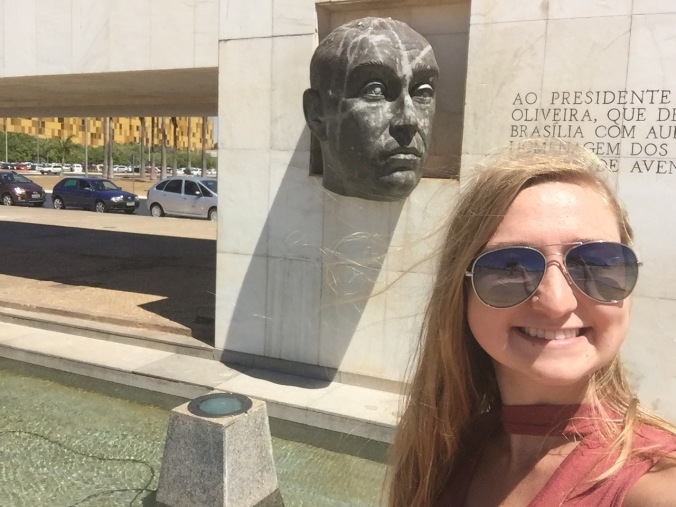 I also got to visit the ministérios, or ministries. There are a significant number of these, but the first one I saw was the ministério dos direitos humanos, or human rights ministry. I loved this.

Given my aspirations in the international relations area, Corina and Claudio made it a point to show me the ministério das relações exteriores, or foreign affairs ministry. This was LEGAL DEMAIS (too cool). I loved it. Adored it. The building was primarily no photographs, but the things they have inside… nossa. Paintings. Carpets. Sculptures. Tables where vital international treaties were signed. It was incredible.

Outside of the ministério das relações exteriores

View from inside of the ministério das relações exteriores. I believe each flag represents a state of Brazil

Some places in the ministério das relações exteriores are cut off for tourists but opened to ambassadors or certain foreign officials when they come to Brazil for work. I’m hoping one day I’ll return to Brazil for work and be able to see the areas that were cut off to 18-year-old me. I guess we’ll just have to see.

I really appreciated this trip because I got to learn SO much about Brazilian politics. Brazil is plagued with corruption – the last two presidents have faced severe scandals, so bad that the last president was impeached for corruption and money laundering. The former VP and current president is also facing similar accusations, although he’s from a different political party. Corina and Claudio took me to see a movie called “Polícia Federal: a lei é para todos” (Federal Police: the law is for all or Federal Police: No One is above the law).

This movie follows Operação Lava Jato (Operation Car Wash) which is an ongoing investigation into corruption in Brazilian politics. This film has been labeled alt-right propaganda, but I’m not so sure. I myself am pretty left, but I do think there is some substance in the accusations brought before the former presidents, both leftists. Some claim about 70% of Brazilian politicians are involved in corruption which makes it really difficult for Brazil to see an end in sight. 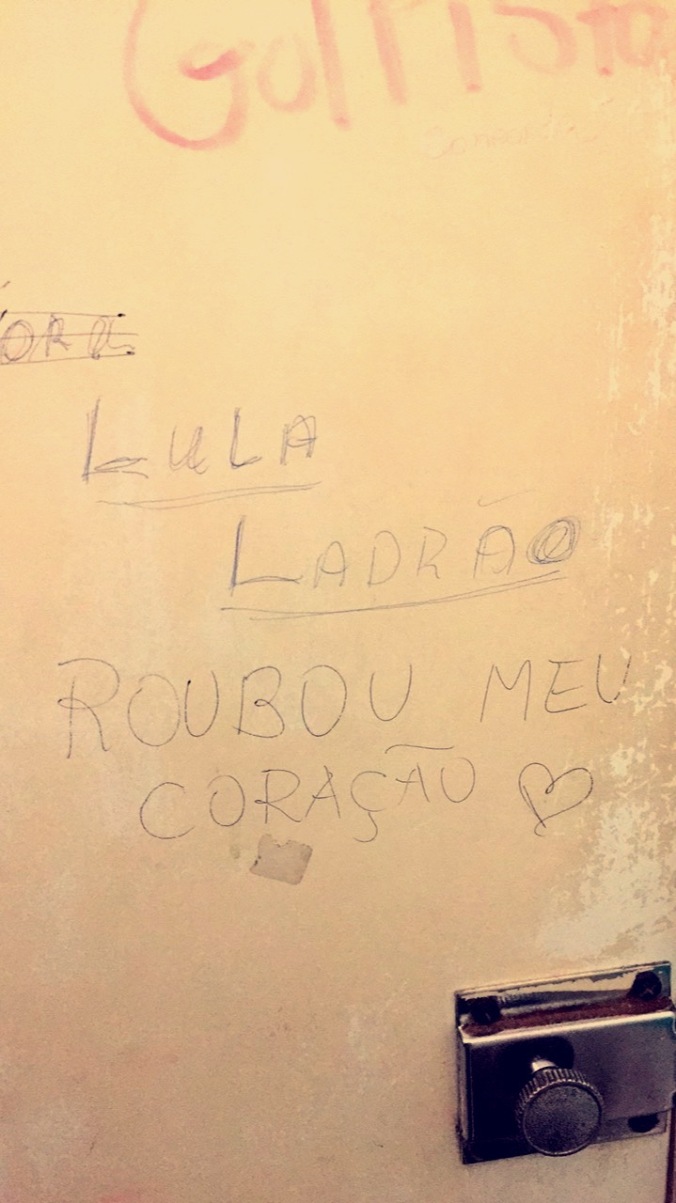 I saw this in a gas station but I think it really highlights the political atmosphere here in Brazil. Lula is one of the leftist presidents who has been accused (and to some degree, proved) of stealing very large sums of money, among other things. Someone first wrote “fora Lula ladrão,” which means “get out Lula thief.” Someone then added to it, changing it to “Lula ladrão: roubou meu coração,” which means “Lula thief: he stole my heart.” Two polar opposite opinions.

Now, the political situation in America is a mess, don’t get me wrong, but learning about all of this reminded me how much worse things could be.

Claudio and Corina, like most Brazilians, are very religious. Very catholic. Now, I’m not religious. Claudio kept jokingly (although not so jokingly) saying I can’t leave Brasília until I’m baptized. This said, we dedicated a fair amount of our time to religious affairs.

Claudio and I visited the two well-known churches of Brasília: Catedral Metropolitana de Nossa Senhora Aparecida (Catedral de Brasília) and Santuário Dom Bosco. These buildings were INSANE. Each had intricate stained-glass covering the majority of the insides. 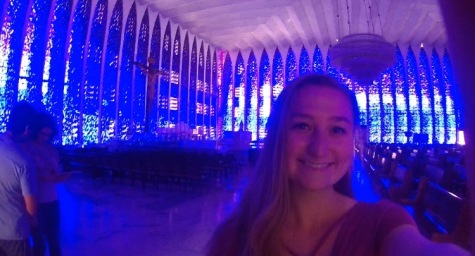 I also, of course, had those terrible, awkward exchange student moments. The last day I was there, a Sunday, I went to church with Claudio and Corina. There, a lady asked me to help with the offering, so I agreed. As I mentioned before, I’m not catholic, so I don’t understand the cross thing they do and I haven’t quite gotten a hold of the whole bowing concept. I had to file down the isle and bow when I got to the front, then stand in the front with the offering container. Things went smoothly, until I guess I missed my cue and didn’t bow at the right time. Corina and Claudio just kind of laughed. Things were fine, but I’m sure I looked so dumb. Typical gringa.

While I got to see and do a lot in Brasília, I also had a lot of down time. I got to sketch for the first time in months. I got to hang out in a hammock. I got to read. I got to listen to new music.

The hammock where I spent many hours

As I mentioned before, I’m hoping this won’t be the last time I see Brasília, but it certainly will be the last time for a long while. Either way, I’m so glad I got to go. Thank you Corina and Claudio for your invitation and your hospitality. Thank you Rotary for granting me permission to go.